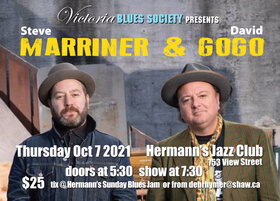 Music: Jazz / Blues
This show is presented by the Victoria Blues Society. Tickets, $25, can be purchased through [email protected]

When two of Canada’s top blues entertainers join forces, anything can happen. Watch out for antics, back stories, and some fabulous music as David Gogo and Steve Marriner team up for an unforgettable experience October 7.

Steve Marriner is the leader of 2018 JUNO WINNER Monkey Junk. He has won a collective 20 Maple Blues Awards, two Canadian Independent Music Awards, a Blues Music Award (USA), and have been nominated twice for a JUNO Award, winning the award for Blues Album of the Year in 2012. Marriner is a vocalist, baritone guitarist, harmonica and organ player, who has toured the world and also been invited to join many artists in concert such as Randy Bachman, Colin James and Big Sugar.

Marriner is joined by Hermann's regular David Gogo, one of Canada's hardest working and most prolific blues guitar virtuosos. He has earned four JUNO nominations, the 2012 Western Canadian Music Award for Blues Recording of the Year, the CBC Saturday Night Blues’ Great Canadian Blues Award for a lifetime contribution to the blues in Canada and has twice been named Maple Blues Guitarist of the Year.

No articles have been linked to this profile